Six thousand vines, six thousand thoughts, but when they are wine, they become pleasures…

This column has been created for the friends of Virgilio who want to exchange, tell each other about moments spent or simply “heard”. Write also what you would like to share with others, sending it to the e-mail info@firminomiotti.eu

But who is Virgilio Scapin? Virgilio Scapin was an eclectic figure engaged as a writer, bookseller, actor, food and wine expert and Prior of the Venerable Brotherhood of Baccalà alla Vicentina. But above all, Virgilio Scapin, who passed away on December 27, 2006, was one of the great friends of Firmino.
Almost the same age as Firmino, Virgilio was born in Breganze in 1958 accompanied by his brother Franco and his father. Here came a mutual sympathy, to unite them is the joy of living in a cheerful and genuine, loving both wine and the CARDS. Virgilio frequents his friend with diligence, his Sunday tour will have for all the years to come, a single road, vicenza-breganze-vicenza, improvising often, with his sympathetic riotous character, help and moral support to sign in the work in the Vineyard. I remember with the guests of the family, strolling along the vineyards he showed his knowledge of the vine, the tree of cherries or figs praising them for its tasty and unforgettable fruits.
For those who have known both, one can only reflect on the diversity of the two characters: one being almost the opposite of the other. And those who knew Virgilio and Firmino in Breganze may not have absorbed the joy, the great desire to have fun with simplicity, the use of a colorful language, but not vulgar, simply easy for everyone.

Below are the messages to Virgilio Scapin…

The Torcolato according to Virgilio Scapin

in Breganze the grape harvesting and the squeezing could have different faces.
In September the most experienced farmers preceded the harvesters and collected the most beautiful bunches of bresparola, Tocai and pedevenda, more exposed to the sun, climbing on the Pregadio.
This grape was brought into the barns and hung on the beams of the ceiling, it was twirled with some strings on display. The operation, which allowed the grains to slowly wilt in the fresh shade without molding, demanded a great overcoat.

A missive to Virgilio Scapin

I tried for many days to find Virgilio Scapin through the streets of Vicenza and among the hills that animate the surrounding landscape; but I can never find him alone. There is always someone talking to him, others who surround him, who ask him for advice, suggestions. A devout little woman who, in the middle of the evening, takes advice about a novel to overcome the temptations and the loneliness of the darkness. If then I try to bring it to the fore, to tell it in all its grandeur, with footsteps from a great man is infringed, leaving behind him the echo of his happy presence.

To talk about Virgilio, and overcome the sadness of his absence, it is better to use the conventional language of physics, fixing in him a point from which radiate vectors, forces that push other bodies that are set in motion towards other fields of force. And such is drawn in my mind an articulated system of people, of which, I notice, the first piece, of Dante and heavenly memory, is really him.

To have entered the field of forces of Virgilio has meant, for those who have enjoyed this privilege, to live an experience of joyous friendship, of respect for the wisdom of the ancient farming culture, of love for books and the written word, of consideration for the simple and witty mockery for the false prophets, for the trombones always too numerous, dissolved by his Olympic wit in the direct conversation and by the dazzling epitaphs with which he animated the pantagruelical parties that had him as master.

Virgilio has been able to make of life a theater and a story, of which he was the first performer, together with his characters, chosen with uncomparable precision, in the world of reality and that of fantasy and often superimposed on each other, using as the only criterion of judgment its extraordinary humanity and its impatience for inelegance and hypocrisy.

How can you look, without embarrassment, at Pina and Firmino Miotti, people-characters, after reading the tale the Fiora? And how can you not think, with respect, about a plate of cod, almost miraculously arrived on our tables, thanks to the heroic deeds of the Venerable Brotherhood of Cod and its Prior Scapin? And how not to end up justifying the fatigue from mules of the venetians, only recently and perhaps not entirely freed from misery, interspersed and reactionary pretons so close to their people, such as the monsignors Scotton of Breganze, revived in the carousel of Archangels?

The sacred fire of Virgilio is the love for life, substantiated by refined culture and human bluntness, distilled in its narrative adjectivation, in which the Sermo familiaris is evoked thanks to the insertion of lexical gems full of indefinite Leopardian.

In his life made of literature and in his literature made of life at the center there is the supreme value of friendship, which feeds on small gestures very scapiniani, which subtract from the kitchen of a restaurant a bowl of ripe cherries to eat in the company of a friend, while the indulgent hostess pretends not to see to share a childish transgression with nostalgia. Or get out of a cellar with a bottle of perfumed wine in hand, while the winemaker shows himself intent on other work.

Substantiated friendship of good complicity, to live life in a light and profound way …

Virgilio, an incomparable friend, able above all to change your life. 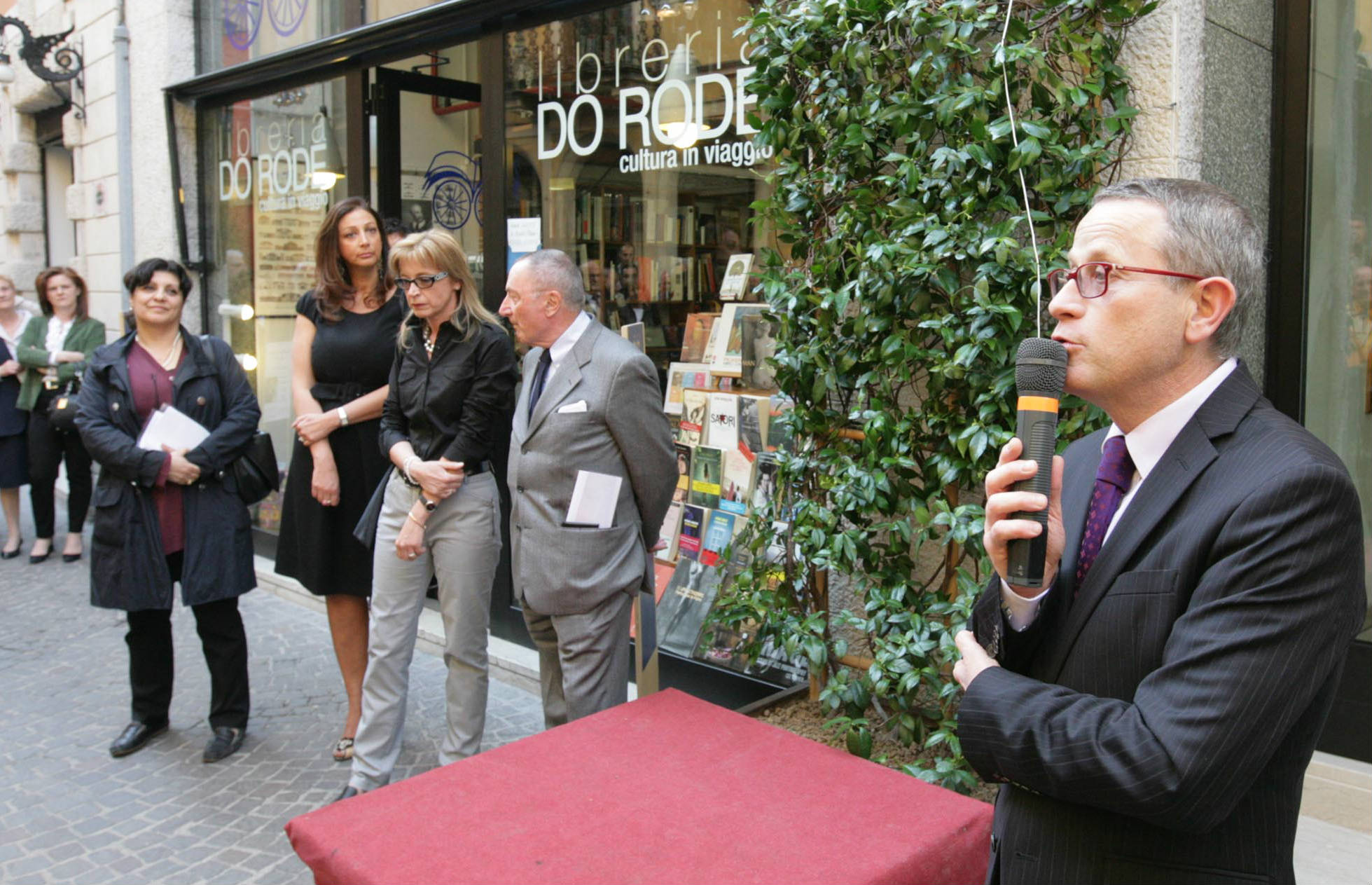 a marble plaque was placed with a portrait of Virgilio Scapin created by Nereo Quagliato, outside the bookstore, in Via Do Rode, which belonged to Virgilio Scapin. Here following the speech of Pio Serafin at Palazzo trissino, seat of the municipality of Vicenza on the occasion mentioned Above.

Virgilio could it be you?

I do not remember the exact time that summer day when, buying wine came Franco Scapin with his brother and Dad. I only know that from the day that plump brother, with slow movements, with a sympathetic face, with blunt and simple ways he always came back. He returned for all the years to follow until the summer of 2006 when the disease consumed all his strength. Virgilio came from an unknown bookseller in Casa miotti, home to farmers, producers of wine.

Virgilio Scapin between pen and cutlery

I know this great interpreter of Venetian and Italian literature for decades and I always have in mind his incredible ability to synthesize intellectual, ferment, vitality, as if it were meant to be done quickly. But the appearance is nice, holding hands as a provost, he certainly learned in the seminary where he traveled, very young, only a section of his call, to return, soon, in the world of the Secular. So we had a writer who won a grinzane Cavour, a Premio comisso, was a finalist of campiello, has published several volumes without ever believing that you can learn to write attending who attends literature, despite having had relationships Life-giving writers such as comisso, parise, piovene, Neri Pozza.

Now that Virgilio Scapin is dead

Now that Virgilio Scapin is dead, we will have to do our best not to reproach him for leaving us alone to remember Him.
(Marco Cavalli)
Continue Reading

The page of “il biblionauta”, curated by the library bertoliana, dedicated to the book “I magnasoete” by Virgilio scapin
(Pio serafin)…….
Continue Reading
Share This